On a sunny Saturday morning in September, a group of volunteers from the Shelby County Democratic Party and the Shelby County Partners for Progress in Education gathered to accept donations for students who struggle to maintain their standards of hygiene while in school.  Solicitations for these products were made to members of both groups and their friends and neighbors.

The Staples / Big Lots parking lot on Pelham Parkway was graced with the white tent and large banner of Shelby Dems, to show donors where to drop off their generous gifts.  Collected items included soap and body wash, toothpaste and toothbrushes, feminine hygiene items, deodorant, first aid supplies, razors and shave cream, shampoo and conditioner, and much more.

Thompson High and Middle Schools were the grateful recipients of this bounty. The items will help students whose living conditions may lack necessities like running water or a place to shower, and who find assistance at school.

The volunteers expressed much gratitude to the kind-hearted and compassionate folks who donated. 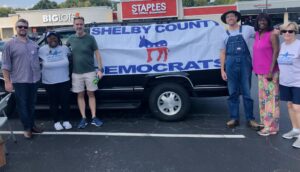 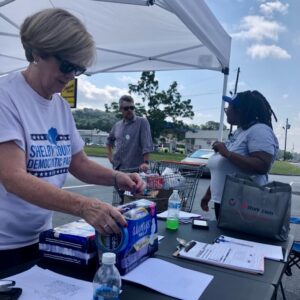 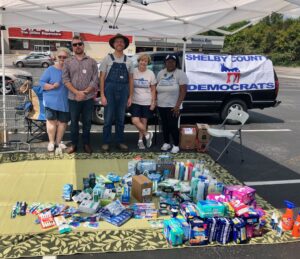 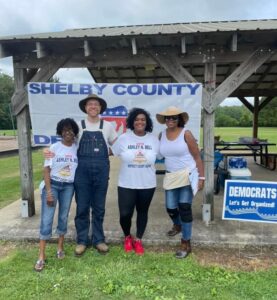 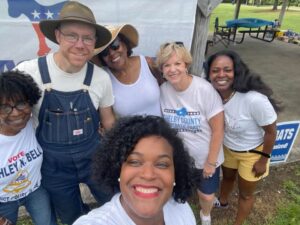 On the morning of Saturday, August 20, a pavilion at George W. Roy Recreational Park in Calera resembled a mini-grocery, with cases of canned goods, stacks of cereal boxes, and bags full of a bounty of non-perishable food items.  Volunteers from the Shelby County Democratic Party helped unload and organize donations from generous people who heard about the food drive at the monthly Democratic Party meeting or from local media reports.  All items donated were delivered to Shelby Emergency Assistance (SEA), to assist in that organization’s mission of providing aid to people in need.

Concurrent with the food collection was a canvassing effort during which several enthusiastic volunteers roamed the streets of the subdivisions nearest the park, ringing doorbells and informing residents of the Democratic candidates running in the upcoming election.  Included among those volunteers were Ashley N. Bell, candidate for Shelby County District Court Judge (Family Court) and Chris Nelson, candidate for Alabama House District 41.  It’s a special thrill for someone innocently opening their door to a stranger to find themselves face-to-face with a candidate who’ll be on the November ballot.  Slow, hot, tiring though it is, personal contact is the best way to connect with a potential voter, as Ashley and Chris can testify.

Canvassers returning to the pavilion found not only a cornucopia of donated groceries, but also a welcome lunch of deli sandwiches, fresh fruit, and cookies awaiting.  The exhilaration of positive responses from potential voter contacts plus the reward of a refreshing, healthy (plus cookies) lunch made it a satisfying Saturday morning.

Keep an eye on this website for announcement of the next community service project and canvassing opportunities.  Join Shelby Dems in their grass-roots campaign to elect Democrats up and down the ballot. 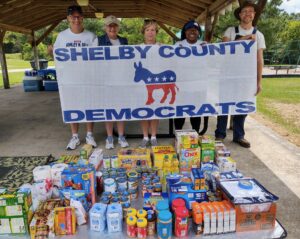 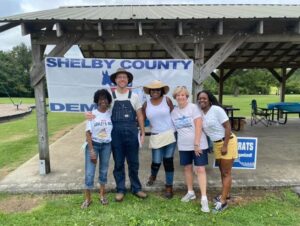 A large Shelby County Democrats banner flew proudly from a pavilion at Veteran’s Park on the morning of Saturday, July 23, marking the location of both a school-supply collection point and a staging area for canvassers.

An enthusiastic group from the local Democratic Party were joined by candidates who will appear on the November ballot.  Ashley N. Bell, candidate for Shelby County District Court Judge, plus Prince Cleveland and Chris Nelson, candidates for State House 43 and41 respectively, joined the volunteers who spread out in the Valleydale/Inverness area to knock on doors and make new friends.

The heat and humidity were real, but forgotten in the exhilaration that came with every welcome from a resident who was happy to learn about (even meet!) the well qualified and capable Democrats who are running for office.  While the canvassers made their rounds, other volunteers stayed at the park to receive donations of school supplies from local Democrats and friends of Dems.  A truck load of the basics, from pencils and paper to notebooks and crayons and glue, were delivered that afternoon to Shelby Emergency Assistance for distribution to children from struggling families.

The canvassers returned to join the other volunteers in a delightful spread of deli sandwiches, fresh fruit, and cookies, organized by some generous members.

Making sure that all children have what they need to begin the school year is a simple yet significant act.  Shelby Dems try to live the motto of a respected Democratic leader: “Do all the good you can, in all the ways you can, to all the people you can, as long as ever you can.” 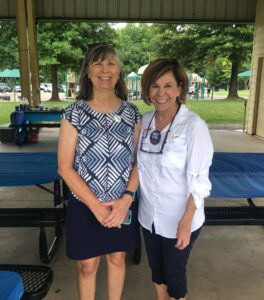 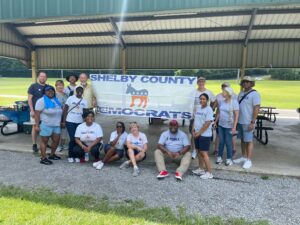 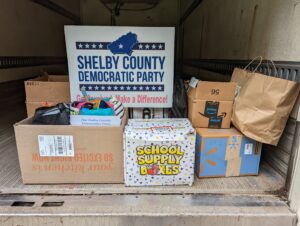 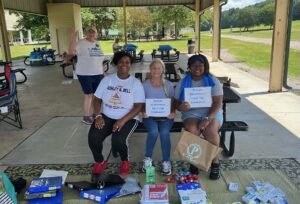 Democrats Clean Up While Canvassing – June, 2022

With multi-tasking all the rage, the Shelby County Democrats bought into the trend on Saturday, June 11, and combined canvassing with litter cleanup.

About a dozen sunscreen-slathered Democrats from Shelby and other counties gathered at the Helena Sports Complex for a refresher course on Mini-Van, assignment of turfs, and distribution of litter-pickers and garbage bags.  It may sound weird, but it actually makes sense – people want their neighborhoods neat and we want people in neighborhoods to know about Democrats running for office.

In some well-groomed areas of Helena litter was not easy to find, but most teams managed to find a stray candy wrapper or soda can, so the garbage bags did not remain empty.  Meanwhile, the canvassers’ hearts were filled with joy when they had repeated conversations with voters who were delighted to learn of well-qualified, dedicated Democrats whose names will appear on the November ballot.

Each canvassing team told the same story – a resident confirmed being a Democrat and declared that they were the only Dem on the street.  Then the canvassers found a neighbor of that person who was also a Democrat, then another neighbor.  We need to create a secret handshake.  Don’t despair – you may have a like-minded person right next door.

The tireless volunteers of the Shelby County Democratic Party and Partners for Progress in Education collected over 2300 individual items of “kid-friendly” foods at their monthly service project on Saturday, May 21.  Consisting of easily opened prepared food or meal items requiring minimal preparation, this collection focused on the needs of school-age children in struggling families.  Many schools in the county whose population is considered food-insecure have programs to provide meals for children during the summer out-of-school months, and these donations will go to those schools to help fill some otherwise empty little bellies.

An outpouring of support from the Shelby Democratic groups and other good-hearted people resulted in a bounty of supplies.  The volunteers manning the drop-off site at the Big Lots / Staples parking lot in Pelham expressed amazement over both the number of donors and amount of donations, demonstrating the compassion and generosity of supporters.

The Democrats are grateful for the support of community members as well as their own members for making their essential items drives so successful.  Next month’s service project will not involve a collection of donations.  Watch this space for announcements of that upcoming, exciting venture. 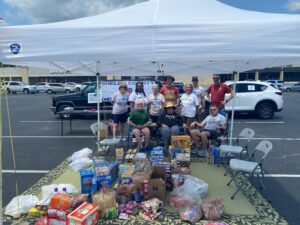 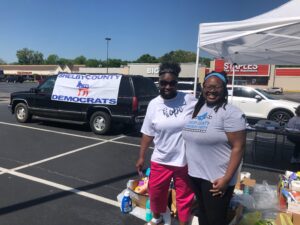 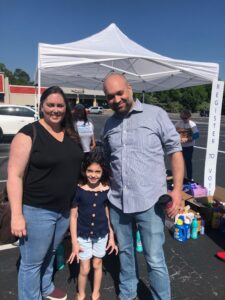 On the morning of Saturday, April 23, a convivial group of like-minded folks met at the Big Lots/Staples parking lot in Pelham to collect, divide, and distribute items necessary for running a home, like laundry detergent, soap, shampoo, household cleaners, toothpaste, paper products, and sanitary supplies.

Dozens of generous members of the Democratic Party, as well as their friends and neighbors, contributed boxes and bags and piles of these essentials.They will be distributed through helping agencies to families who sometimes struggle to have enough food, making cleaning supplies not a top priority.

By passing on the donations to the Middle Alabama Area Agency on Aging, Oak Mountain Mission Ministries, Shelby Baptist Association Ministries, and Shelby County Emergency Assistance, the Shelby Dems support these organizations in their missions of helping people in need. 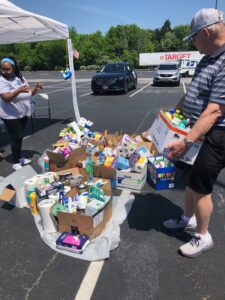 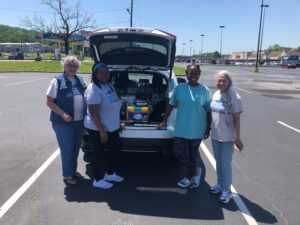 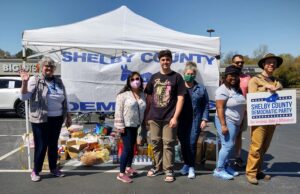 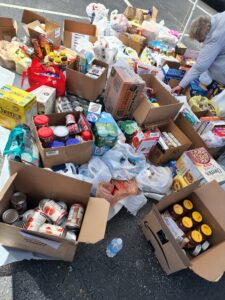 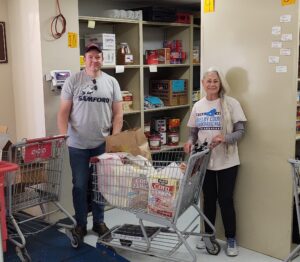 On Saturday, March 26, under a huge banner emblazoned with “Shelby County Democrats” and braving a brisk wind that tried but failed to turn the white tent into a sail, several dedicated Democrats spent their morning unloading and organizing donations of food.  Generous donations poured in from Democrats well known to the group as well as others who had heard of the food drive and were welcomed as prospective members.

By noon, enough shelf-stable groceries had been accumulated for two SUVs and one pickup truck to be loaded to capacity.  This bounty will be given to Shelby County Emergency Assistance, Shelby Baptist Association Ministries, Oak Mountain Mission Ministries, and Elvin Hill Elementary School for distribution to those who need it.

Democrats Donate Diapers
by the Dozens and Dozens!

Over 3100 diapers were collected by the intrepid volunteers of the Shelby County Democratic Party on a frigid Saturday in February.

Pickup trucks and SUVs sporting signs proclaiming Democrats Donate Diapers huddled in the parking lot at Big Lots in Pelham to accept the donations.  An anthill of activity ensued, with generous donors advancing from all directions to converge on the ever-growing pile of diapers on a tarp between the vehicles.

A well-known Democratic activist arrived with her car loaded with donations from her sorority, and another faithful Dem said that she budgeted $100 to see how many diapers she could buy.  Answer:  a lot.  A young mother stopped her car and jumped out, thrilled to find that Democrats abound in Shelby County, then she hurried home and returned with unopened boxes of diapers that her baby had outgrown, and left with an invitation to get involved with the Democratic Party.

The diapers, in sizes ranging from newborn babies to adults, were distributed by the volunteers to Shelby County Emergency Assistance in Montevallo, Oak Mountain Ministries in Pelham, Shelby Baptist Association in Columbiana, and Middle Alabama Area Agency on Aging in Alabaster.

After surviving January’s successful school supply drive conducted in cold and windy conditions, then experiencing ice cube hands and feet while collecting diapers in February, the volunteers decided to order warm weather for the March donation event.  No matter the weather, snow or heat, rain or sleet, the Democrats will do our best to provide for the needs of the neediest in our county. 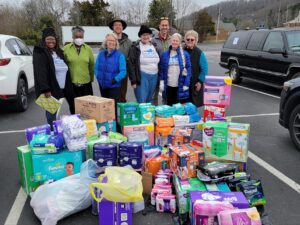 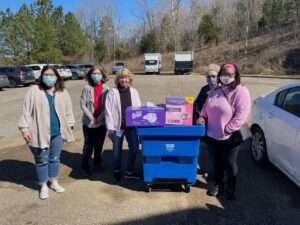 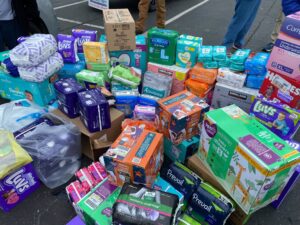 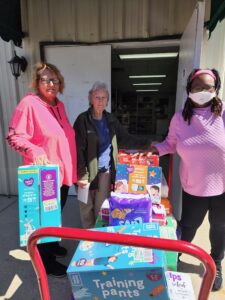 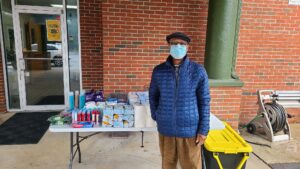 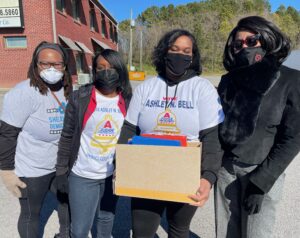 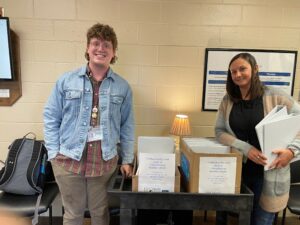 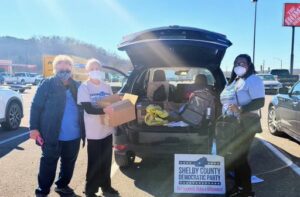 On a blustery day in late January, a few hardy Democrats shivered in a parking lot off Highway 31 in Pelham.  Two SUVs stood side-by-side displaying signs for the Shelby County Democrats and announcing their School Supply Drive.

A steady stream of cars and trucks drove up to deposit boxes of pencils and crayons, stacks of notebook paper, binders of all sizes, arrays of composition books, piles of colorful glue sticks, and backpacks galore into boxes, bags, and bins inside the vehicles.  Donors from all over the county learned of the drive by word of mouth or from Democrats making appeals to neighbors, church members, and civic organizations.

After three hours of collecting, the SUVs were jam-packed with enough school supplies to satisfy the requests of five area middle schools.  One generous volunteer offered her garage as storage and staging area for the distribution, which happened a few days later.  Hours of counting, sorting, boxing, and labeling resulted in a bounty of supplies that hard-working Democrats delivered to grateful guidance counselors at Calera, Montevallo, Columbiana, Pelham Park, and Thompson Middle Schools. 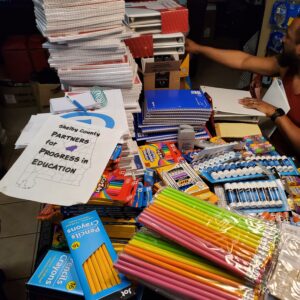